In 2019, after several police officers were nearly struck by vehicles during traffic stops, the West Chester (PA) Police Department initiated a comprehensive enforcement program to address the Pennsylvania "Move Over" law. Prior to conducting enforcement efforts, members of the Traffic Safety Unit set out to examine the efficacy of the currently recommended MUTCD signage for roadway incident scenes.

The current wording for incident signage throughout the Philadelphia region reads "Emergency Scene Ahead". It was the belief of the police officers, based on extensive experience directing traffic and dealing with motorists, that the wording of such signs should be more direct. After a great deal of conversation, it was decided to purchase a sign that read "Move Over – It's the Law".

The sign was purchased with funds provided by the Pennsylvania Towing Association. The PA Towing Association, led by President Debbie Abel, was instrumental in providing funding and assistance to assist with the project. Armed with a newly worded sign that otherwise matched the color and dimensions of the current "Emergency Scene Ahead" sign, the police department set out to study which sign worked best.

A three-part study was conducted over the course of several months. The first part of the study involved setting up a tow truck and a simulated disabled vehicle on the side of the road with no signage. A police car with flashing red and blue lights was positioned behind the tow truck and disabled vehicle (see photo 1). Other police officers then went and hid "down-stream" to count how many cars moved over.

After setting up the first scenario to determine a baseline for motorist compliance, officers completed two more studies on the same day of the week and at the same time of day. On one day, the "Emergency Scene Ahead" sign was deployed (see photo 2). On the other day, the "Move Over – It's the Law" sign was deployed (see photo 3). In each instance, officers hid down-stream to document the move over compliance of passing motorists.

The first series of tests were set up in the 500 block of East Gay Street, in a fairly congested area for traffic. After completing the first series of tests, the study was repeated at another site in the 800 block of West Chester Pike, in West Goshen Township. The reason two sites were chosen was to test the theory under different traffic conditions, and to also see if the study results could be replicated.

In the second study, which was on a more open road with less traffic and more time for a motorist to move over, baseline compliance was 65.7%. When the "Emergency Scene Ahead" sign was deployed, compliance rose just 4.3% to a 70% compliance rate. However, the "Move Over – It's the Law" sign saw a 22.2% increase from the baseline to an overall compliance rate of 87.9%.

Having completed the study, the West Chester Police Department then initiated an extensive education and enforcement campaign. Officers conducted car stops for traffic violations and then shadowed each other, stopping motorists who failed to move over. In some instances, violators were stopped and issued citations. In other instances, officers stood at a down-stream traffic light and distributed educational pamphlets to stopped cars.

During these enforcement efforts, a second sign was purchased and placed downstream, where motorists were being pulled over by the police. The sign read "Did you Move Over?" The purpose of this second sign was to increase the overall awareness of the motorists who may have passed the cars that were being pulled over by police officers. When motorists pass someone who has been stopped by the police, they do not know why the person was stopped. By putting a sign upstream of the enforcement effort that said "Move Over – It's the Law" and a second sign downstream that read "Did You Move Over", it was the hope of the police officers that motorists driving through the enforcement area would understand why other drivers wer being pulled over. As the saying goes "If a tree falls in the woods, and no one is around to hear it, does it make a sound?" By making sure motorists understood why their fellow drivers were being pulled over by the police, the hope was to better spread the message regarding the "Move Over" law. Overall, the mission was a great success.

It is the belief of the study participants that the more direct wording on the new sign does a better job of telling motorists to move over. As such, it is highly recommended that additional studies, scenarios, and discussions should take place to address the possibility of changing the recommended MUTCD incident scene signs that are currently used throughout the nation.

The West Chester Police Department would like to thank Debbie Abel of the Pennsylvania Towing Association, Dean Gilbert of West End Towing, as well as the members of the West Goshen Police Department, all of which were instrumental in assisting with this study.

The following photos provide examples of the simulated scenarios, as well as the signs, or lack thereof, that were used during the study. It should be noted that the emergency vehicle and tow truck overhead lights were activated, however, the camera shutter speed failed to capture the flashing lights. 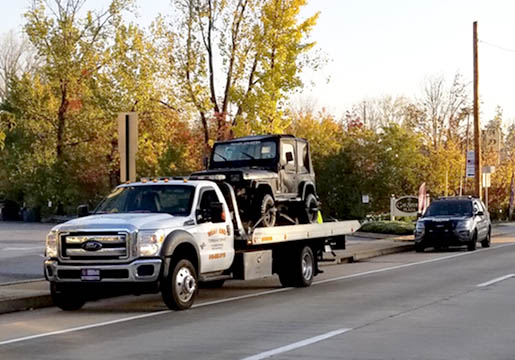 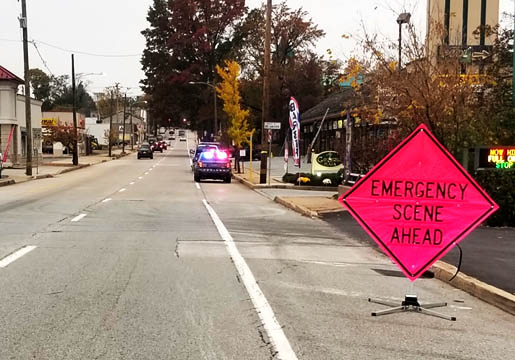 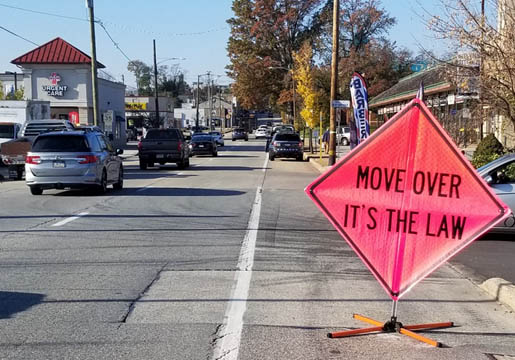 Chris Daly is a 30-year fire service veteran and a full-time police lieutenant who specializes in the reconstruction of serious and fatal vehicle crashes. Chris has a master's degree in Safety from Johns Hopkins University and lectures nationally on the prevention of emergency vehicle crashes. He is a contributing author to "Fire Engineering" and "Fire Apparatus and Emergency Equipment Magazine", and a court qualified expert in emergency vehicle operations. Chris' "Drive to Survive" program has been presented over 530 times to over 23,000 emergency responders across the country. He has also recently published a new EVOC textbook entitled "Drive to Survive : The Art of Wheeling the Rig", which can be purchased from Fire Engineering Books and Video.